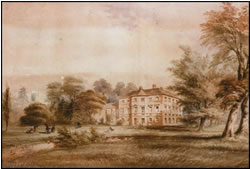 2016 was the tercentenary of the birth of Lancelot “Capability” Brown,
the famous landscape gardener who radically changed the grounds and gardens of many estates in England during the 1700s and an exhibition of his work in Yorkshire was shown in the Mercer Art Gallery in Harrogate in the summer of that year.

Brown redesigned several Yorkshire estates including Sandbeck and Roche Abbey near Rotherham for the Earl of Scarborough, Temple Newsam near Leeds for Viscount Irwin, Stapleton Park near Pontefract for Baron Stourton and the estates of the Earl of Holderness at Aston near Rotherham and Hornby Castle near Bedale.

Research for the exhibition in Harrogate showed that Robert Darcy, the fourth Earl of Holderness first employed Brown at Aston Hall in the early 1760s.    The old hall had been damaged by fire and the Earl asked the great British architect John Carr of York (1723-1807) to rebuild the house and Lancelot Brown to work on the grounds at the same time.   The formal gardens were replaced by lawns all the way up to the house with a ha-ha to keep animals out of the grounds, as shown in the photograph, without interrupting the views over what was then open countryside.  Nearby fishponds were made into lakes and trees planted in the parkland.    The Earl owned other properties, including Hornby Castle, Syon Hill House in London and two estates in Bedfordshire, and Brown worked on them all.   Whilst Brown was working on the grounds at Hornby, the Earl also employed John Carr to remodel the Castle.The Rector of Aston Church at the time was Reverend William Mason who was himself a garden designer and worked on several flower gardens for his friends and patrons, including the Earl of Scarborough at Sandbeck and William Weddell at Newby Hall.    Mason was working on the estate of Lord Harcourt at Nuneham Courtenay in Oxfordshire when he first met Brown and they became friends.    Mason assisted Brown on the Aston and Hornby Estates and an extract from Lord Holderness’s accounts held in the British Library says “4 Feb 1760:  Paid Mr Brown £100 for surveying Aston Estate.    Brown’s friend the poet, Rev. William Mason was the vicar of the parish, and the church and his garden formed part of the landscape”.

When Capability Brown died in 1783, Mason wrote the epitaph for his memorial in Fenstanton Church near Huntingdon which reads:

Ye sons of Elegance, who truly taste
The Simple charms that genuine Art supplies,
Come from the sylvan Scenes, his Genius grac’d
And offer here your tributary Sigh’s
But know that more than Genius slumbers here.
Virtues were his, which Arts best powers transcend.
Come, ye Superior train, who these revere
And weep the Christian, Husband, Father, Friend.