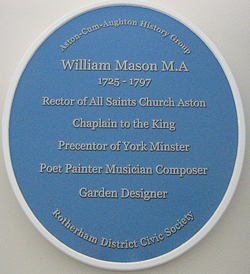 A blue plaque in memory of William Mason, Rector of Aston from 1754 to 1757 was affixed to the William Layne Reading Room on Aughton Lane, Aston near Sheffield on 30th March 2014. The ceremony was carried out by our Father Ian Jennings will.

William Mason was born in 1725 in Hull. In 1742 he became an undergraduate at St. John’s College, Cambridge where he was awarded an M.A. He became a Fellow of Pembroke College, Cambridge and in 1754 he was ordained priest at St. Margaret’s Westminster.

He became Rector of All Saints’ Church Aston in 1754, was appointed Prebendary of Holme, York in 1757 and Canon and Precentor of York in 1762. As Precentor he was responsbile for the music at York Minster. In 1757 he was appointed one of twelve Chaplains to King George II.He was a poet, musician, composer and designer of gardens. His great friend was the poet Thomas Gray who visited Mason at Aston many times. Mason had many connections in literary and artistic London, counting among his friends, politican and writer Horace Walpole, painter Sir Joshua Reynolds and actress Mrs. Sarah Siddons.

He supported his friend from Hull, William Wilberforce, in his campaign against slavery and on 27th January 1788, during a sermon in York Minster where he preached for the abolition of slavery, he baptised Benjamin Moor, an American freed slave. He also worked hard for the improvement of conditions in York Prison and in York Lunatic Asylum, contributing generously to both.

He was a very caring parish priest and was “ever careful to attend to his personal duties. He is by far the finest preacher in the whole country, and village and town flock to hear him”. He devoted a third of his income to good works. He installed new pews in the chuch and two of the bells in the tower. In 1789 he rebuilt the school in Aston, now known as the William Layne Reading Room.

Mason was injured whilst alighting from his carriage. Although he officated at Church on the following Sunday, he died from complications of his injury on the following Wednesday 5th April 1797.