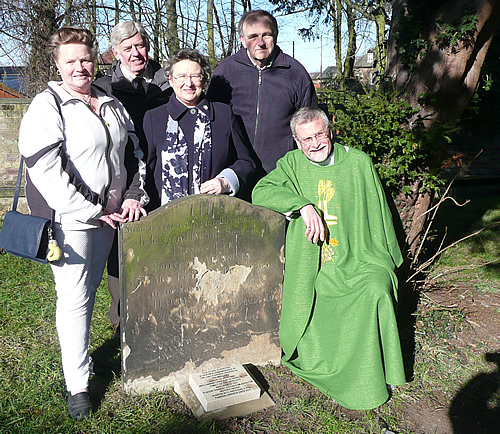 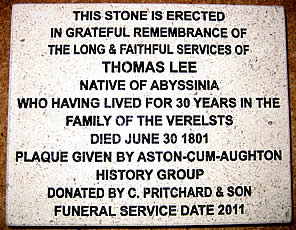 In the churchyard of All Saints Church, Aston is a headstone marking the grave of Thomas Lee who died on 30th June 1801.   Thomas was a native of Abyssinia (now Ethiopia) and was brought to England by Harry Verelst when he retired as Governor of Bengal in 1769.   In 1771, Thomas Lee was baptised at St. Margaret’s at Lee in Lewisham, London and the entry in the parish register reads “Thomas Lee the Indian black servant of Governor Verelst was baptised July the 17th 1771”.

In 1773 Harry bought the Aston Estate from Robert, Earl of Holderness and brought his wife Ann and his servant Thomas to the newly built Aston Hall where Thomas lived until his death in 1801.   The wording on his gravestone tells us that Thomas was valued by the Verelsts.

Thomas lived in Aston during the time that William Mason was Rector.   William was a friend of William Wilberforce who worked tirelessly for the abolition of slavery.  In this he was supported by William Mason and on the 24th January 1788, Mason baptised an American freed slave in York Minster and preached against the slave trade.   I like to think that Thomas may have influenced Mason’s views on slavery.
Thomas Lee gravestone

Unfortunately time and weather have eroded the stone and the inscription is no longer legible.   Aston-cum-Aughton History Group decided to have made an engraved stone to be placed in the ground in front of the original stone so that Thomas can continue to be remembered.    This stone has very kindly been donated by C. Pritchard & Son, Funeral Directors of Swallownest and has now been placed in the churchyard in front of Thomas’s headstone.

A dedication service was held at the graveside of Thomas Lee on Sunday 19th February 2012 at 11.15 a.m. The choir and clergy accompanied by members of the congregation processed from the church to the grave where Father Jennings spoke about Thomas coming to live in Aston 240 years ago and living as part of the community. When he died in 1801, the Verelst family and people from the village would have been standing around his grave to remember him, just as we are today. He thanked the history group for providing this new stone that will ensure that Thomas Lee will continue to be remembered.

Tea and coffee was served in the Narthex of the church after the ceremony.